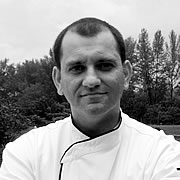 Born in Brazil, Alex Nassar obtained a certificate from the Culinary Institute of America as well as a Master Certificate in Food Service Management from the prestigious Cornell University in the United States.

He began his career working for renowned culinary pioneer Claude Troisgros as a sous chef in Rio de Janeiro.

Alex then spent time in Barcelona’s El Bulli restaurant with Chef Ferran Adria and his early exposure to these 3 Michelin star establishments defined his commitment not only to culinary quality and creativity but also to pushing the boundaries of traditionally defined cooking.

Searching for exposure in larger operations, Alex joined the Sheraton Rio Hotel & Towers team in 2002 as Executive Sous Chef and began developing a keen sense of the diverse aspects of managing a large kitchen brigade.

In 2006, he was offered the opportunity to join the Banyan Tree Group as Executive Chef in charge of F&B of their flagship property in Phuket.

With a team of 160 individuals overseeing over 15 outlets, Alex gradually took on additional responsibilities within the Banyan Tree Group, including the opening of the Laguna Holiday Club as well as Laguna Home Residences. He personally managed the concept development and the opening of Tre Restaurant, a signature fine dining Vietnamese Restaurant, pioneering the concept of French influenced fine dining Vietnamese Cuisine.

Looking for new challenges, Alex went on to join the Nitro City Development in Panama as Executive Chef in charge of F&B for this ground breaking concept; the development of which may well herald a new hospitality trend in the years to come.

Highly regarded by those he leads and respected by his leaders, Alex has become an expert not only in managing culinary teams but also in guiding them towards new challenges and novel approaches.