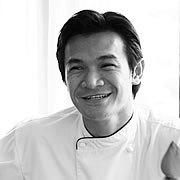 Tammasak graduated with a Masters Degree in Kitchen Development from the German Ueberkingen Culinary School in 1994. In 1999, after five years spent at the Maritim Hotel in Stuttgart and the Michelin Star awarded “Top Air Transport Restaurant”, he joined a prestigious culinary team aboard the Queen Elisabeth II cruise liner as a Demi Chef De Partie, catering to an exclusive set of 1800 passengers in five fine dining rooms. The following year, he became Chef De Partie on the Seaborne Legend before returning to Germany as a Sous Chef at the award-winning restaurant “Taku”.

Upon his return to Thailand at the JW Marriott Resort & Spa in Phuket, Tammasak developed greater insight into the various aspects of kitchen management as the Executive Sous Chef of the property.

While achieving professional recognition first as an Acting Executive Chef and then as an Executive Chef, Tammasak fine-tuned his very own style of Thai Cuisine, infusing the traditional Thai dishes of his roots with some distinctive western elements from his time spent in Europe. Tammasak’s JW Marriott contributions included creating the Ginja Cooking School, opening & refurbishment of an additional six outlets.

The desire to pursue his very own culinary philosophy led to is departure from the Marriott Group and in 2007 he joined Banyan Tree Hotels & Resorts as their Corporate Thai Chef. During his tenure, Tammasak developed and implemented the “Saffron” Thai Restaurant concept in 10 Banyan Tree properties before becoming an Area Executive Chef for the Banyan Tree Group.

Winner of numerous awards, Tammasak has inspired a new generation of young Thai chefs. His culinary passion and flair has been a driving influence in bringing Thai cuisine to the forefront of the Asian culinary evolution.